I’m at the bar from television’s Cheers, sitting catty-corner from Norm’s usual spot.  The door slams open, and Josh Charles, the actor who plays Will Gardner on The Good Wife, rushes in. 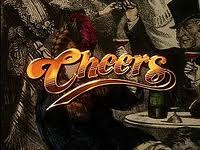 There’s a table to the right of me, and there are two men sitting hunched over.  I’m not sure what they look like because all I see are the backs of their heads, but I know they are writers.  They are scribbling furiously on legal pads.

Josh Charles starts berating them.  “You think this is work?  This is nothing!”  He slams his hands on the table.  “You should both go out there and break rocks, that’s what you should do!”  He’s screaming at them, but these men don’t seem to hear him, because they just keep on writing.

The door slams open again, and an Asian woman enters the bar.  She’s laughing.  She’s the daughter of Kimora Lee Simmons, the lady who was married to Russell Simmons a few years back.  Except this daughter looks exactly like Kimora herself.

Still laughing, she runs over to Josh Charles, who takes her in his arms, giddy himself.  He turns to me and says, “You know, I’m half Asian.  Look at me a certain way, you see it.”

And sure enough, Charles leans back in his chair, and the lights above paint his face at such an angle that I see it, too: his hair darkens, his eyes narrow, he’s Asian.  And something else: he’s turned almost black and white, like an old photograph.

I don’t usually write about my dreams, but this was very vivid and incredibly strange.  I hadn’t seen The Good Wife in a couple of weeks, so why was Josh Charles on my mind?  (Who’s an awesome actor, by the way — sorry for dragging you into this.)  And truth be told, I don’t even know what Kimora Lee Simmons looks like.  (Or her “daughter” — which wasn’t even a question, by the way.  I knew it was her daughter, however impossible it seems now.)  The Cheers setting makes sense, as I watched the Ted Danson bit on CBS Sunday Morning a few days ago, and they played footage from the show.

But the rest of the stuff is pure crazy dream logic, which is as entertaining as it is baffling.