Recently I had the idea to catch up with some old movies, so I looked up the AFI 100 list to see which films I haven’t seen.  Turns out there are plenty, so I picked one out, and it led to another, and then another, and I have a feeling I’ll be seeing more old movies in the future.  I feel foolish for once thinking that I wouldn’t relate to films made before 1950 (All About Eve and Sunset Blvd. seemed like a decent starting point).  How wrong I was! 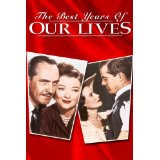 The Best Years of Our Lives (1946)
Three World War 2 vets
return home and try to find
family and love.
It’s almost three hours long and I wish I were ten times longer.  It’s not a complicated story, about three different generations of men who return from WWII.  One has emotional scars, what we’d now diagnose as PSTD; another has physical scars, the loss of both hands; and the last struggles to readjust to his family and his job.  When I first saw Harold Russell, who plays the man with hooks for hands, I marveled at his skills with his hooks (lighting a cigarette, opening doors, etc.), thinking he must’ve put a lot of hours to master them for his acting gig.  In reality, he did lose his hands in the war and he wasn’t even a professional actor!  Here’s a bit of trivia that might come in handy one day: Russell is the only actor to have won two Oscars for the same role.  When the awards were given that year, the Academy wanted to honor him and the vets, so they created a special award for him, thinking he had no chance of winning Best Supporting.  He won them both.

There are two highlights in this movie: the scene between Frederic March and Myrna Loy, who play the parents to Theresa Wright.  In their bedroom, the three of them have a conversation about love that just may knock your socks off.  My socks are still knocked out cold.  The other highlight is purely visual, of Dana Andrews walking along the decommissioned airplanes.  I suppose nowadays they’d just CGI it, but here, it’s real, and that makes it even more powerful. 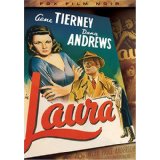 Laura (1944)
Who killed Laura Hunt?
Her fiancé? Her dandy?
Ask her, detective.
I wanted to see more of Dana Andrews, so Laura was the next film.  Two years older than The Best Years of Our Lives, it is known as one of the best noirs of its time, and the film lives up to that expectation and then some.  Though Andrews plays the hard-boiled detective, the reason to see this movie is for Clifton Webb, who plays a writer and a…I’m having a hard time coming up with an apt description for his relationship with Laura, because it’s just sort of weird.  He’s definitely in love with her, but it never feels like a straight-up man-loves-woman kind of thing.  Not exactly mentor and mentee, either.  You should just see the movie to find out for yourself.

Vincent Price plays Laura’s fiancé, and I never knew what a handsome, strapping lad he was in his youth.  Before Laura, the only Price I knew was the laugher in Michael Jackson’s Thriller and the inventor in Edward Scissorhands. 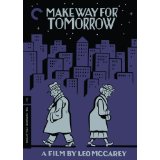 Make Way for Tomorrow (1937)
Ma and Pa Cooper
must live without the other.
This heartbreak is pure.
This film is almost eighty years old, and yet it is startling how much it applies to our current times.  The story, again, is deceptively simple.  Aged parents lose their house to the bank, but none of the five children want to take them both on, so Pa goes with one daughter while Ma goes with one son.  The actors are naturalistic in their performance with very little melodrama, which is amazing since this is 1937!  In a way, the last twenty-five minutes of this movie reminded me of Richard Linklater’s Sunrise series — two people walking and talking about their lives and viewpoints.  Even though the film is sad and grim, there are plenty of laughs, once again reinforcing my steadfast belief that humor is a vital ingredient of every movie in every genre.  The ending — oh, the ending.  The director, Leo McCarey, lost his job because he wouldn’t change it.  He took one for the team, and we are now forever blessed by his stubbornness.