1) I’ll be partaking in Significant Objects, a very cool project that’s run by Joshua Glenn and Rob Walker.  From the website:

A talented, creative writer invents a story about an object. Invested with new significance by this fiction, the object should — according to our hypothesis — acquire not merely subjective but objective value. How to test our theory? Via eBay!

So if you feel a hankering for some significant eBay chachkie like this one, go for it.  I’ve been buying and selling stuff on eBay since 1998, so I look forward to having my item listed.  I believe it’ll be up in a week or two. 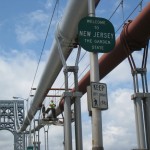 2) On May 2010, a nonfiction piece I wrote for KoreAm Magazine will be included in a New Jersey anthology aptly titled What’s Your Exit? From the website:

Punk rock-spirited independent publisher Word Riot Press will release What’s Your Exit?: A Literary Detour through New Jersey in May 2010.

It goes without saying, it’s an honor to be included with so many talented writers.

3 thoughts on “Significant Objects and What’s Your Exit?”