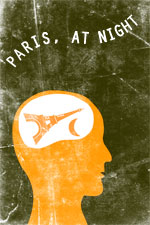 In 2007, my wife and I spent our honeymoon in Paris (with a brief stint in London as well).  I’m not much for traveling, but I loved just about everything about Paris: the Seine, the food, the museums, the people.  I didn’t think we’d be going back for years, but as it turned out, in eight days, we’ll be back in the City of Lights, because right now, we’re in Rome (and loving it!).

In any case, ever since I left Paris two years ago, I tried to write a story that took place there.  After two stalled attempts, this one just sort of happened, in almost a single sitting.  Which is always a good thing, because it doesn’t happen often for me.

2 thoughts on “Paris, at Night”