Originally published in The Nervous Breakdown

Fourteen years ago, I started an online magazine.  Maybe that doesn’t sound like a big deal now, since anyone with a computer and an Internet connection can create an online presence, but back in March of 1994, it wasn’t so easy.  Because Netscape Navigator wasn’t even at 1.0 — it was in beta.  And Internet Explorer didn’t exist.  Email ran on mainframes and VAX machines, and Gopher was the protocol of choice when it came to delivery of information in a menu-like interface.

Anyway, I had to come up with a name for the magazine, and I chose Whirlwind.  I’m trying to remember why I picked that name, but honestly, I can’t recall, though I would like to say now that I regret choosing it.  I mean it’s not a terrible name, but couldn’t I pick something cooler, like Natalie Portman’s Shaved Head?  I mean I was in college, for God’s sake.  It’s just sad.

Once I had the name, I wanted to make this legit, so I filed it with the International Standard Serial Number folks.  Looks like it paid off, because the ISSN still belongs to me.  From that point on, it was a matter of getting the word out, which meant posting on various writing-related USENET newsgroups and listservs.  And just like that, for the first time in my life, I’d become an editor of my very own magazine. 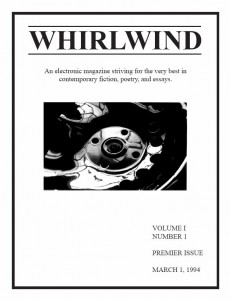 Which was painful.  So many awful pieces filled my inbox that I seriously considered ditching the project.  But then one day, Keith Dawson sent me his story, “Barking Dogs and Flying Saucers,” and suddenly I realized why people have the crazy notion to start a magazine like this: because I would be introducing this great work of fiction to the world.  Or so I thought; realistically, it was probably about a dozen readers.  Still, the rush I felt was genuine.  I couldn’t wait to share these barking dogs and flying saucers with the reading public at large.

It took many days to assemble the magazine, using Aldus PageMaker (remember Aldus? yeah, me neither), a scanner, and a good friend who helped me edit it.  I was so preoccupied with making sure the text didn’t have any typos that I forgot to look over the cover.  PREMIER ISSUE, it reads, for eternity.  (And there’s plenty of typos in the text, too, unfortunately.)

In the end, I published four more issues of Whirlwind before I ran out of gas.  I didn’t even make two years, but hey, who’s counting.  There was another story by Keith Dawson, titled “Cigars”, that’s worth reading; also Jonathan Drout’s “Oranges.”  I put out two formats, PostScript and ASCII (PDF wasn’t around yet).  Enjoy.

I think it took me a couple of hours to create this ASCII art for the text version of the magazine.  Good times.

One thought on “Whirlwind”